Here is a round-up of some of the technologies we’ve had fun with during our trip to the beach!

It all started with dinner conversation at the Frying Pan restaurant, where the greater family was gathered during the annual beach trip. I said to my niece and her husband, “You all know that there’s a user-controllable web cam on top of that tower there, don’t you? You can look in on this area any time you want.”

The tower with the camera is hard on the right. The Frying Pan restaurant is the dark-faced house-shaped structure on the left.

They did not know. So here’s the link. It requires Java VM. It’s a nice way to visit a wonderful place when you can’t really get there in person. Here’s an example of what you can get: 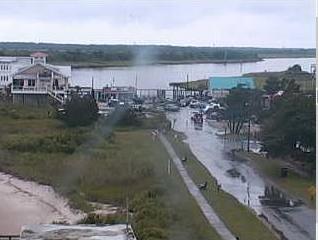 A friend vacationing at nearby Bald Head Island last week said that in addition to watching the ships pass by on their way to the port of Wilmington, NC, they were enjoying tracking the comings and goings with an app they downloaded. The app I tried was no great shakes, but the MarineTraffic.com website is great! It is pretty self explanatory, giving the movement of ships in the area via a clear if a little temperamental user interface. 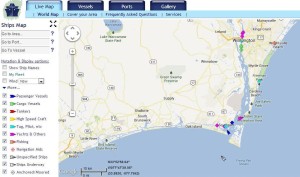 The first night we were down here at Caswell Beach, NC was very very clear. We had a wonderful time just watching the sky. It seemed pretty apparent to me that the high-altitude air traffic was following a particular pattern. All of the traffic seemed to be following a north-south passageway to the east of my position by some number of miles. I wondered if it was a real corridor, or just a series of coincidences. I found this representation of all US air traffic that shows clearly that we are under a very real corridor [1]. We are on the eastern edge of the bottom of North Carolina, and you can see the traffic concentration there like water falling out of (and into) the corner of a wet rag. Note the animation begins at noon and runs 24 hours.

In addition to the airplane traffic and a couple of shooting stars, I saw some other things pass by on this very clear night. I’m pretty sure what I saw were two (man-made) satellites– they just appeared as points of light, like stars, but visibly moving against the stars’ static background. I did a little research and found that there are a number of sites that help you find naked-eye visible satellites. There are four such sites on this page.

One of my brothers described the shark tracking site, which shows certain sharks and their movements. My brother was very impressed by how the far the sharks roam, and how quickly they get from say NC to Boston. The site is here. The shark positions are updated every day or three, so it is a smidge less entertaining than MarineTraffic.com, but still fun.

The Bridges of Brunswick County

Another of my brothers inquired as to the grade or pitch of the bridges connecting Oak Island with the mainland. I was able to get the data with my cycling computer, and it turned out to be 5% for the newer bridge and 4% for the older one, in a not-very-scientific study. It occurred to me that all of the relevant data about the bridges could and probably should be in a publicly accessible database. If there is one, I didn’t find it.

One thought on “Fun with Technology at the Beach”