medave November 21, 2015 about Cycling, about North Carolina No Comments

Series Introduction: I finally posted a North Carolina map in the garage and put pins on all the counties in which I have biked. I hope to bike all 100 and document in words and photos.

11 November 2015: Granville and Person Counties. With Memorial Day on Wednesday, we have a single day off in the middle of the week.  I thought a short loop to pick up a couple more counties would be pleasant and a chance to reflect some on my favorite veteran, who passed earlier this year.

On the short car trip to Oxford, I passed by a huge, multi-building factory that is plainly shut down.  Seems such a shame to look at the place where there used to be maybe 100 jobs or more.  I know economies have to change, and a closed factory may not necessarily be a bad thing.  But it’s hard to imagine a closed factory being a good thing.

Coming into Oxford, I was greeted with Bojangles as the out-parcel of a WalMart shopping center, with a Dollar Tree and the rest of the rubber-stamp chain stores. “Welcome to Anywhere, USA,” I thought.

Granville County, #34:  West out of downtown, I took the the Lake Devin road, which was fine– I finally saw a deer frolicking in the distance, I had expected to see deer frequently over the last 150 miles, through some serious rural woodland, but had not prior.  The turn on to Enon Road marked the beginning of 13 of the most perfect cycling miles possible.  Great surface, no traffic, pleasant rolling scenery. I saw sheep and guinea fowl grazing along with the usual horses and cows.   Highly recommended. 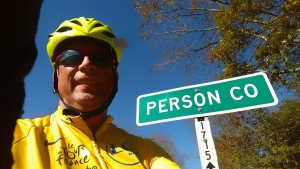 I hated to turn off but for the fact that navigating is half the fun.

Person County, #35:  I turned onto secondary roads in Person County, and they were, while completely intact, the super rough kind of pavement.  Range Road in Person County is definitely the place to dump the body if you ever off somebody [3!].  At times it smells like that has indeed happened a month or so ago. 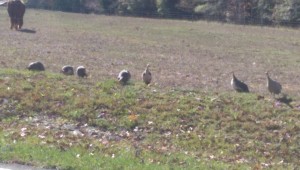 Guinea Fowl, or some such

I wrote last time about how many miles you have to ride in a county in order to claim it as a county you’ve ridden.  I figure I rode seven miles of Person county, all pretty close to the eastern edge, so I would definitely consider minimally acceptable.  But I’m doubtful of how much variation there would have been even if I had gone further west in Person county.  The vibe was light rolling early piedmont, not really so different from Vance and Warren counties to the east.  I think in the big picture, it is enough.

I guess this is maybe the upper reach of the old Camp Butner [3!]

I turned back to the east and was soon crossing my new old friend the Tar River, and wondering where Redcoats crossed the Tar [1], and whether or not they got tar on their feet [2].  And I thought about how the soldiers of Revolution were our first veterans.  And of course I thought about my Dad.

I turned on to US-158 near Berea.  The Berea Mini Mart is what you DO want out of a rural way-station:  It had all sorts of novelties like fishing gear and general store-ness within, along with tempting food and a place to sit, all stuffed into a funky physical space.  And staffed by the ever-present middle-easterner, and frequented by locals that you can scarcely understand.  After crabbing last time about how good places are never where they are supposed to be in the rhythm of your ride, this one actually was.  However, it was such a short ride that I didn’t really need or want anything, and so shoved on after a nice look around.

US 158 between Oxford and Roxboro NC is a peculiar road, in that it is not all that busy but has (apparently) a disproportionate share of 18-wheelers.  In the several minutes I was on it, they trucks actually outnumbered the cars.  Like NC-97 from Liggett to Rocky Mount, if it was not for the generous shoulder on the road, it would have been very uncomfortable and likely dangerous.

I threw this route together fairly quickly, and about mile 27, I found out why that is such a bad idea.  My planned route turned onto an unpaved road.  Uh-oh.  And I thought the secondary roads in Person County were tough.  That said, it really wasn’t such a bad road, and I was only on it for a couple of miles, so I decided to give it a whirl.  It cam to a full stop within a mile, fence, no trespassing sign, and all.  So it just goes to show you that not everything that you can map with MapMyRide will work. 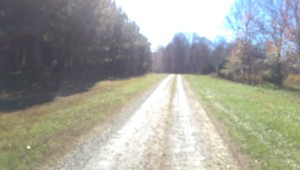 Again the scenery in Granville County was superb.  Highly recommended.

Back in Oxford, I rode in through the old district. I saw some wonderful old homes that made me think differently about the “Anywhere, USA” moniker.  I wondered what the town was like back in the 60s, and which store might have been the one where a black man made a comment in the direction of a white woman and ended up dead.  I wondered which neighborhoods might have housed the various participants.  I rode by the Methodist church which is almost certainly where the young Vernon Tyson, the pastor who married Debbie and me, was appointed at the time, and led the reasoned, compassionate, and sorely out of fashion response to the tragedy.  And I thought about his son Tim, who was a friend of my brother Chris years ago;  Tim chronicled it all as a party of his sociological studies [3]. 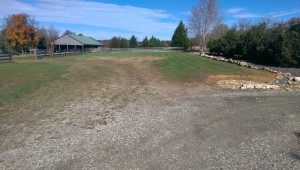 Oops, road is discontinuous. Thanks again!

Maybe I will reach for that book again.

After I put my bike into the truck, I at lunch at Taylor’s Grill, a Mom-and-Pop place that I had spied earlier.  Inside I found Mom and Pop, sure enough.  Pop was a permanent fixture in one of the booths– his electric guitar and amp were plugged in there.  He was playing with his grandbaby.  After a while he issued a few blues licks for the little to dance to.  Charming.  There were customers there from all walks of life, and I thought maybe I had found a culinary find with some serious taste sensations.  Unfortunately the food proved out to be forgettable.

[1] Turns out it was much further east [ref]

[3] Turns out, on closer inspection that RANGE ROAD was almost certainly the perimeter road along the old Camp Butner Range.