medave November 14, 2015 about Cycling, about North Carolina No Comments

Series Introduction: I finally posted a North Carolina map in the garage and put pins on all the counties in which I have biked. I hope to bike all 100 and document in words and photos. 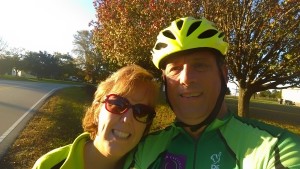 at the drop off

Vance County, already visited – oops  We took off at 7:00 a.m so Deb could drop me off in Henderson at 8:00.  It was 8:20  before I took off.  The day was perfectly gorgeous: clear, cool, still, with fog resting on low areas.  The initial roads were ideal, with angular early light shining sideways through the trees and lighting up the dew.  I saw several yards full of chickens, and roused several dogs from their porches. 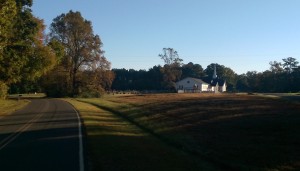 The Church in Waiting

Out of Henderson, I took an indirect path (Rock Mill, Daniel Harris roads and the like) to the Old Warrenton road.  These roads were superb, beautiful, and essentially traffic free.

It was hard to stop for a picture just 6 miles into the trip, but I didn’t think that the combination of early light and mist would be available later in the day.  A church with it’s graveyard on the grounds is the image my Dad used to explain to me “The Church Triumphant” and related terms; every time I see one I have the impulse to record it.

NC 58 out of Warrenton is the Country Club road.  It is again more or less perfect.  These eastern roads rolled more than I expected but did not produce much to work up a sweat over.

I’m happy to report that I have been to Liberia now:  there is a pool room there, but it is boarded up.  After that on NC 43 there is Marmaduke.  Don’t blink.  The road here was agreeable, but for miles-at-a-go stretches had red clay deliberately deposited on the shoulders to build them back up.  The day I was riding was the first non-rainy day in about two weeks, so the shoulders were a mess.

I selected a route that would take me by Medoc Mountain State Park.  Having been there and now with the assistance of a topographic map, I am having some difficulty locating the mountain; anyway, the riding is fine, except: 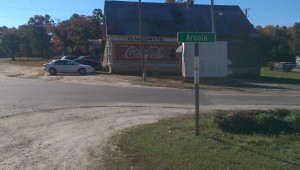 I had recently gone through Arcola, Essex, and Hollister; all of which had inviting-looking country places where you might be called “Shug” (short for sugar) and get a really memorable ham and egg biscuit, but it wasn’t yet time for me to stop.  When that time arrived I was at the crossroads of Medoc Mountain Road and NC 48.  This is far enough removed from the beaten path that folks still smoke in their convenient store (and call you ‘boss’) even though it’s contrary to the law.  Mae’s Grill was entirely forgettable, and had me pining for the places past in Essex and so on.  There was an active ne’er-do-well lurking around in the parking lot, prompting images of him hopping on my bike and riding off. 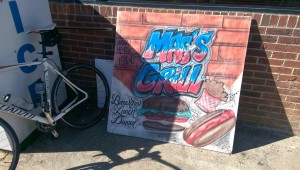 Now continuing east at mile 41 or so, I took the Ringwood road toward Enfield, crossing over I-95, and then turning south on the Bellamy Mill Road to Whitakers.  Here there was much cotton in the fields.  At some level I still expect to see tobacco.  There are mobile-home sized packages of harvested and packaged-for-transfer product in the field, and so much cotton left behind after harvesting.    I presume the cotton is profitable, and that there are smart people figuring out how much residual cotton left in the field is too much.  Close to 95, I was surprised to see a big solar farm where I’m sure tobacco once stood.  If there are 640 acres to a square mile, I’d guess it was as much as 200-300 acres. 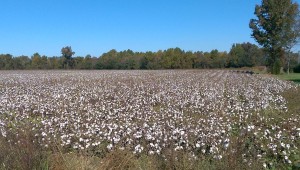 On these stretches of road, I was able to inquire of easily a dozen or so woolly bear caterpillars, as they shuffled across the road, what the upcoming winter would be like.  Vexed:  there is no consensus at all.  Some are all black, some nearly all brown, most in-between.  Another legend bites the dust.

Whitakers was my favorite pass-through town.  A railroad goes through the middle of town.  Lots of big, porchy houses with giant oaks in the yard and wide quiet streets. 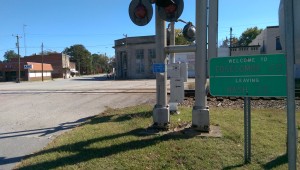 Southeast to Leggett, the farthest east and lowest elevation point on the 110-mile ride, the roads were again completely agreeable if a bit samey and not all that picturesque.  My average speed was 17.7 mph for the 70 miles, albeit slightly downhill in the aggregate.

Out of Leggett I took NC 97 toward Rocky Mount and the trip turned a good deal less fun.  First, I was up above 70 miles.  I wanted to find some unique place around Leggett for my second stop, but none was to be found.  NC 97 has too much traffic volume, including plenty of 18-wheel trucks, to be a comfortable ride.  It would be outright dangerous were it not for the generous shoulder that provides a bike a place to be.  Plus it was generally uphill, going upstream with the Tar River on my left (but not visible).  Plus, I lost my cue sheet (directions) somewhere in here, which had me relying on my phone from there forward, which takes a lot more concentration and hand work, so you have to slow down in a safe place, or stop.  Good bye, average speed.

For some 12 miles there continued to be oppressive traffic and no good place to stop and have a break.  Grumpy.  “Certainly there will be interesting things as I get to the edge of Rocky Mount,” I told myself.  I was accordingly thrilled to see The Bridge Grocery and Grill right at the edge of Rocky Mount.  Inside, the store distinguished itself as an archtype of the bad kind of independent store.  It had whole sections of bare shelves and unusable space.  It had the two staples of crappy: 1)restroom out of order (sure it is) and 2) broken drink fountain.  I did not see any evidence of a grill, not that I would have eaten anything from it.  There was the obligatory middle-eastern clerk, this particular one was hijab-clad.  40 miles removed from my previous break, I turned on my heels and left, pressing on.

I went right through the middle of Rocky Mount, which seems to be one continuous bad neighborhood, or maybe it’s just where I was, or maybe it was just my mood at that time.  Happiness was largely restored with a stop at Hardee’s on the east side of town, now counting down the miles from 85.  I departed Rocky Mount on NC 97 (still) which I really can’t recommend owing to traffic.  It was safe enough, but the road is a thoroughfare.  Same goes for NC58, a left that you make towards Wilson.
Wilson County, #32
At the edge of Wilson I turned right on to Packinghouse Road, starting a weave between Nash and Wilson counties, on back roads, towards my destination of Bailey.  When again got to the western side of I-95, I knew I was close.  With the turns, the fatigue, and the navigation by phone, my average speed was in the cellar, but ya just press on.

When I laid out the route, I knew I would be reach mile 110 near Bailey.  I imagined that I would casually role into town, find the malt shop on the square downtown, and wait for Deb to come get me.  As is turned out, Deb beat me to Bailey and was languishing in a convenient store parking lot, so there was nothing to do but text her where I was when I got to mile 110.  There is a God:  he put a picnic table by the road at mile 110.00000, which is exactly where I stopped the bike and texted Deb.  All in all it was a really good trip.  The weather was superb, perfect even, which is saying quite a lot in our part of the world this year.

The Rules  The project to ride 100 counties is mine alone, so I get to make the rules.  The only rule I can think of is that I don’t want to clip off the corner of a county and say I have ridden it.  I would ride each county in a meaningful way, I told myself.  The goals of this ride were: 1) go 110 miles; 2) add as many counties as possible (without upsetting the future ride to Kinston) 3) keep it in the east, for flatness– I’m not in peak shape just now, and I was considering taking an old steel bike with tall gearing; and 4) keep it a day trip.  My first cut showed just a few miles in Vance county, so I backed it up trying to get at least 10.  I think I ended up with 8.  I think I’m okay with it.

Mapping difficulties If there’s a really good way of detecting a good cycling road from a bad one when plotting these courses, I don’t yet know what it is.  Streetview on Google Maps can help, but isn’t fool proof.  NC 38 and 97 on either side of Leggett provide a great example.  On the detail map that I have, they appear as the same grade of road, however one is perfect, the other barely usable.

The other difficulty with laying out the routes is that Google Maps and MapMyRide are unaware of county lines, so you have to get some other media involved.  The NC DOT highway map is a staple of life in NC, but for cycling it does not have enough detail. Another difficulty is that the small burgs that you might use to triangulate where county lines might be differ from the highway map to the on-line maps.  Hopefully the detail map I have recently procured will assist with this issue.