medave September 18, 2014 about Cycling No Comments

In preparation for a bike race recently, I had my bike serviced at my LBS [1], including truing up the rear wheel. Apart from the fact that I wasn’t very competitive, the race went fine, but in loading the bike back into the truck for the trip home, I heard this horrible tumbling sound emanating from the rear wheel. On inspection, it turned out to be not one but two nipples that had become unscrewed completely from the spokes and were careening about the inside of the rim. The sad news about that is that with two unattached spokes, my wheel was sufficiently untrue (wobbly) that I had a brake rub during the race, thus slowing me down. Darn.

I soon learned that to re-install the nipples, I would need a nipple driver. I further learned that nipple drivers are not stocked anywhere in greater Raleigh (a town of about 1.2 million people), so I ordered through my LBS and only got fleeced a little (I thought it would be quicker than waiting on delivery through Amazon. Ha! I was wrong.).

But the episode did provide ample (sic) opportunity for nipple and nipple driver jokes.

I was pretty surprised at how easy it was to get the nipples re-installed, because even with the nipple driver, it requires some precarious balance and contortion. When it was done, I wondered if I would ever get any more than 30 seconds of use out of my specially-ordered tool. 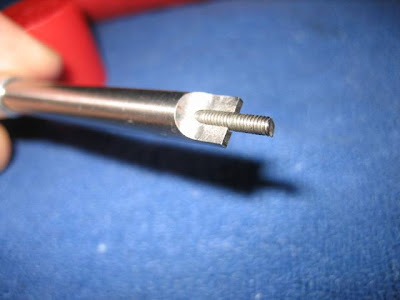 The magic is that the nipple is slotted and has a hole in the center, so it sits (albeit precariously) on the tip of the nipple driver at install time. Why it isn’t achieved with a hex-headed nipple and a hex socket is beyond me.

I found out pretty quick. It wasn’t the next ride, but the ride after that produced another two unscrewed spokes. I don’t know if they were the same ones or not because I did not take good enough notes initially. But I can tell you that on the second round, it was one each drive-side and non-drive-side.

It is a medium pain in the ass to re-install the nipples because you have to remove the wheel, remove the tire (both beads) and the rim/spoke tape before you can even start the precarious balancing act with the nipple driver. Oh yeah, and you have to coax the nipples out of the rim in the first place, and each time you don’t get them onto the spoke successfully.

So my point is that you can’t have your nipples falling off all the time. It’s just not practical.

My LBS mechanic suggested that it is a good idea to secure them with LocTite, the blue (sub-permanent) version. My impulse was to say, “If this is a good idea, why didn’t you do it when you had the wheel in the first place?” but I refrained. My bike shop retailer friend (different shop) frowned at the idea. But I went to Lowe’s and got some blue LocTite (it’s with the adhesives, not the nuts and bolts).

The Lowe’s guy, unwise to what I was going to use it for, said that if I put even the blue on the hinges of the front door, I wouldn’t be able to get out (this was in the context of an unsuccessful attempt at humor on his part).

So I was thinking on the drive home that there must be a zillion things that would provide a safer weak adhesive, like toothpaste, or something that I already have on the bike tool bench: rubber cement. So with two nipples to be adhered, I tried LocTite on one and rubber cement on the other.

It was no contest, but it wasn’t a fair fight, either. I did the LocTite first, but my attention was diverted and it had started drying by the time I got the nipple to it. Once I got the nipple onto the spoke, it was really tough sailing tightening the nipple to where it had tension on it. The Loctite was definitely causing the spoke itself to torque. I hope there wasn’t any permanent damage.

The nipple flew onto the still-wet rubber cement. If this nipple comes off again, I will update the post, but I am pretty certain that I will be using the regular old rubber cement from the inner tube repair kit going forward. There’s always a lot of extra in those kits anyway.
___
[1] Local Bike Shop. If you did not know this, you aren’t reading enough cycling mags.