medave July 30, 2014 about Cycling, about North Carolina No Comments

Series Introduction: I finally posted a North Carolina map in the garage and put pins on all the counties in which I have biked. Owing to my sojourn across the state a couple of years ago, I got the count to 25. Now I intend to bike all 100 and document in words and photos. 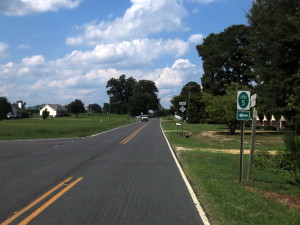 Hard to believe that I have never ridden in a county so close by. My son’s band camp at Campbell University gave me a chance to arrive prior to pick-up and add the county to the Done list. The day was sunny and beautiful, and riding through this part of Eastern NC resonated with deeply with me, I guess from road trips and visits of old. The fields are full of tobacco again, as they were when I was growing up. There was a time a dozen or so years ago when hardly any tobacco was being farmed, but the old allotment system was abandoned and it started to appear again. 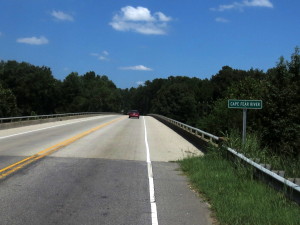 I reviewed several cycling routes originating in Buies Creek, and selected one that would take me south rather than back toward Raleigh. I could not find one that would conveniently allow me to add two counties, but did find one that would take me to the promising little towns of Erwin and Bunnlevel. I checked online to see if I could find anything in the way of can’t-miss attractions or one-of-a-kind good eats. The News and Observer is conducting just such an expose’, county by county, but they have not addressed Harnett County yet.

All I could find was what seemed to be a budding diner war between Tubby’s and Jackson’s, both apparently fairly recent comers, and occupying the same block! I decided to that I would settle the debate.

On the road, I was stymied badly by a phone that was unexpectedly uncharged. I didn’t print out a cue sheet for the ride, so when it gave out, I didn’t directions anymore [1]. Fortunately, I was NC BIKE 5, so I figured I would just follow that for a half hour or so, then turn around and take it back.

Also fortunately, NC Bike 5 goes right through Erwin, and I saw the diners. I elected to take my pictures and do my stopping on the return leg.

On the far side of Erwin, I crossed the Cape Fear, which is oddly meaningful for me wherever it occurs. 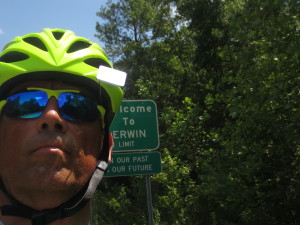 I turned around shortly after that. In assessing the diners, Jackson’s was an easy choice. Tubby’s had appalling decor, even for Erwin, and moreover it had an odor that I had no intention of growing accustomed to. Not feeling hungry, I decided to come back after the ride if time allowed.

The ride was fun and the roads were close to perfect for cycling. The setting was plainly rural, but at all points seemed to have an unshakable suburb vibe, even though there were no ‘urbs’ in site. One mile or so stretch of road was occupied by well cared-for pre-fab double wides. But the eastern NC notes came through clearly, and that put a smile on my face. 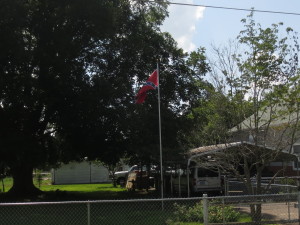 After the ride, I did go back to Jackson’s. Even though it had hard floors, hard tables, hard booths, and a decided ‘joint’ feel, the nice person came out and announced that she would be my server today. Both of the diners boasted a $5 lunch, so I thought I would give that a try. There was a choice of hot dogs, hamburgers, or pork chop sandwich, but I went with the country ham sandwich. “It’s very popular,” the server said. When it arrived, it was country ham thin enough to bite through and chew; lettuce; the most beautiful, almost certainly locally-grown if not back-yard grown tomato slices you ever saw, plenty of mayo, on tasty toast. It was divine. It was served with fresh fried okra; I am sure the okra entered the building as fresh pods. Delicious.

I had eaten half of both at this point. 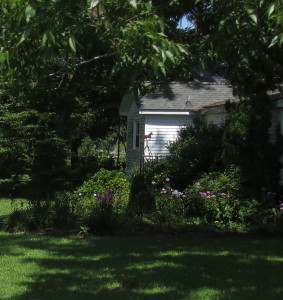 ____
[1] I will be printing cue sheets from now on. The day was sunny and the sun was high, and looking into my phone was the same as looking into a piece of black glass. Shade didn’t even offer much help.